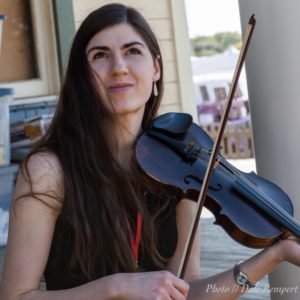 Along with her brother, guitarist Dan Faiella, Liz has performed at Club Passim, the Boston Celtic Music Festival, the New England Folk Festival, the Acadia Trad Festival, and New Hampshire’s Seacoast Irish Festival. She has received music and dance scholarships from the New England Folk Festival Association and the Country Dance and Song Society; and has shared the stage with celebrated New England folk musicians including David Surette, Randy Miller, Dudley and Jacqueline Laufman, Matt and Shannon Heaton, and Grammy winner Dan Zanes. In 2015, she was selected by the New Hampshire State Council on the Arts to conduct fieldwork on the history of contradancing in New Hampshire.

Liz has taught at the Strathspey and Reel Society of NH, Maine Fiddle Camp, and Acadia School of Traditional Music & Arts, and is the founder and organizer of the Fall Fiddle Festival at the Concord Community Music School, where she is on the faculty of the Folk Department. She creates fiddle lesson videos, sheet music, and practice tracks for traditional fiddle tunes on youtube.com/lizfaiellamusic and patreon.com/lizfaiellamusic.