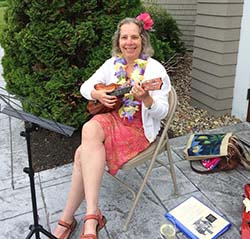 Margery Landis has been teaching instrumental music in MSAD #75 since 1986. First she taught at the elementary level, and has been at Mt. Ararat Middle School since 1995. Margie’s bands have performed in the Hall of Flags in Augusta, the Augusta Civic Center, in Providence, RI for the New England League of Middle Schools Conference, MMEA Conferences (1995, 2003, 2007), and along the shores of Merrymeeting Bay. During the 2008-2009 school year she took a leave of absence in order to study music therapy at Arizona State University in Tempe.

Her current teaching responsibilities at Mt. Ararat include 7th & 8th grade concert band, 7th & 8th grade jazz band, and 6th grade general music. In 1992 she founded a multi-generational community band called The Merrymeeting Community Band. The band performs throughout the summer months in the mid-coast area and will proudly celebrate their 25th season in 2016. Margie plays the horn and serves on the applied music faculty at Bates College. She studies ukulele with Joel Eckhaus in South Portland, and attends the Strathmore Ukulele Summit in Bethesda, Maryland and the Aloha Music Camp in Hawaii.