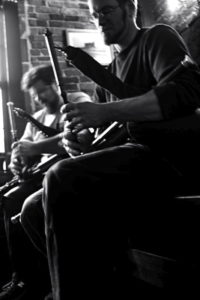 Darryn Petersen began playing the whistle and uilleann pipes twenty four years ago, after being inspired by a Seamus Ennis album he bought on a whim. His first lessons were with Jim Daily and the St James The Great chapter of Comhaltas Ceoltoiri Eireann in Glasgow, Scotland, and then with All-Ireland piper Patrick Hutchinson in Providence RI. He is greatly interested in the musical styles of the great pipers of the early and mid twentieth century, such as Seamus Ennis, Tommy Reck, and Willie Clancy. Although his day job restoring Maine’s early homes keeps him quite busy, he still finds time to haunt local sessions, and particularly enjoys sharing tunes with Fiddle Camp instructors Tamora Goltz, David Stimson, and Sharon Pyne.