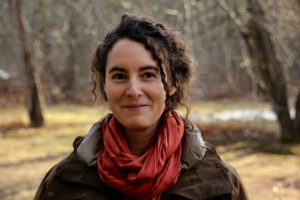 Mia Bertelli grew up in the mountains of New Mexico, singing at every chance she could get. Her love of song led her to Vermont at the age of fifteen, where she dove into the polyphonic singing camps of Village Harmony like a penguin into the sea. Since then she has been filling kitchens, streets, concert halls, vegetable gardens, and public restrooms with song, both in the northeast and overseas. Her irrepressible inclination to harmonize and great love of playful nuance have mostly gotten her into all the right sorts of trouble, so she counts them among her blessings.   END_OF_DOCUMENT_TOKEN_TO_BE_REPLACED

Susie Burke has been singing and performing since the early 80s, as a soloist, and a member of several bands and duos, the longest running being with David Surette. Her musical tastes and influences are varied, encompassing contemporary and traditional folk, swing, country, topical songs, and acapella singing, with detours along the way for Broadway showtunes and classic ballads. “She posesses one of the finest, purest ballad voices heard in folk music today” wrote Scott Alarik in the Boston Globe, noting that “her phrasing is unerringly devoted to the lyric…Burke displays a gift for pulling honest emotional chords – all too rare in these clever and cynical times.”  END_OF_DOCUMENT_TOKEN_TO_BE_REPLACED 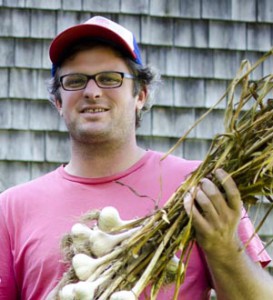 Bennett Konesni grew up in Appleton, Maine, 10 miles downstream of Maine Fiddle Camp.  He was naturally drawn into the strong communities of old-time music, sailing, and farming in the area.  At thirteen he shipped as a deckhand aboard local schooners, sailing Penobscot Bay and learning the traditional work songs of the tall ships as he raised sails and hauled anchor.  Later, at Middlebury College, Bennett co-founded the student farm and spent six months studying Zulu farming songs in South Africa.  END_OF_DOCUMENT_TOKEN_TO_BE_REPLACED

Kaity teaches fiddle in Damariscotta and has played for dances for many years with The Maine Country Dance Orchestra, and with the band The Lady Bugs. A native of Great Britain, Kaity has brought many a fine tune from the British Isles to our local dances. Kaity also plays viola in the local community orchestra and has four children, all of whom play music and come to camp every year.
7 Creek Lane Damariscotta ME 044543 207-563-8440 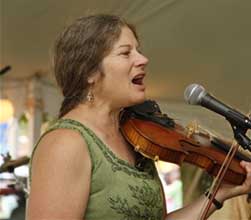 Pam sings and plays several instruments in the folk trio, T-Acadie, is fiddler and singer for the Maine-based Cajun dance band, Jimmyjo & the Jumbol’Ayuhs, plays fiddle and mountain dulcimer in the contradance band, Scrod Pudding, and performs solo or with guitar player and caller Bill Olson. She is an accomplished tunesmith and has composed scores of tunes, from lively jigs and reels, to entrancing airs and beautiful waltzes.